Welcome to Driving Through Time: The Digital Blue Ridge Parkway 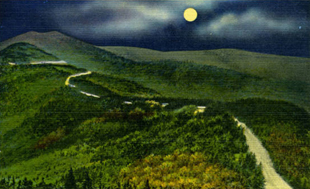 We invite you to take a virtual trip through the history of this beautiful 469-mile "elongated park." Conceived during the depths of the Great Depression as part of Franklin D. Roosevelt's New Deal and completed in 1987, the Parkway continues to evolve through its ever-changing relationships with surrounding communities, landowners, and the public. The park winds its way through 17 North Carolina and 12 Virginia counties, numerous communities, and countless different southern Appalachian landscapes. Its economic, social, and psychic impact on the region has been profound. Read a brief history of the Parkway here.

Its hold on the public imagination has been equally strong. Every year since 1946, the Blue Ridge Parkway has been the most visited site in the entire National Park system. Driving it is a physical experience of moving through an unfolding series of often breathtaking spaces. It is a thoughtfully designed landscape of peaceful farm scenes, carefully chosen views far and near, and a scenic road placed on the land so as to appear that it had always been there. 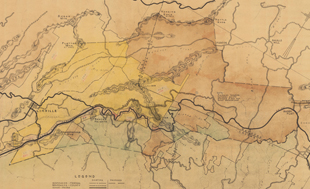 Yet the Parkway landscape conceals the many elements of social conflict and disruption that have marked its history. "Driving Through Time" allows students, researchers, and digital tourists to uncover hidden stories, hear forgotten voices, and understand the often wrenching choices that the construction and preservation of a scenic parkway in a populated region have necessarily entailed.

The Parkway encompasses over 80,000 acres of lands acquired from private owners and other federal agencies. Its development involved many challenging decisions about spatial matters, including routing, land use, and road access. Relationships between the Parkway and the more than 4500 owners whose lands abut the park have been shaped by conflict and compromise over the configuration of lands and travel routes for both local citizens and tourists. Key elements of the Parkway experience are the rolling vistas "borrowed" from surrounding landowners. 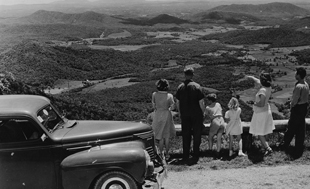 It is possible, of course, to describe the Blue Ridge Parkway's past in words, and historians have assembled documents and written books that try to do that. But to really understand the road's history, we must take the advice of North Carolina's chief Parkway designer, State Highway Commission locating engineer R. Getty Browning, an "on the spot" highway locating engineer who laid out the Parkway route in North Carolina by walking its length: we must see the situation on the ground. By placing historical materials in their geographic context - placing time and stories in space - "Driving Through Time" invites us to do just that.

Read about the historical materials in this digital collection and the special features that will help you to explore them on the "Driving Through Time" What's Included page.